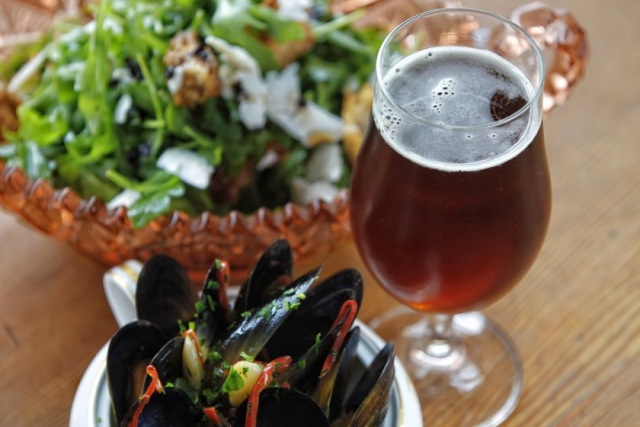 Join us for a Food/Beer Pairing Tour on Valentine's Day!  You may have heard of progressive dinners, well this is a progressive pairing experience!  The food will be selected to match the specific beer you will be drinking, which will be unique to each brewery. You'll not only leave this tour with a deeper knowledge of how craft beer is made & how to pair beer with food, but a full belly. There will be 8 food items paired with 8 delicious beer samples between Harmony Hall & Creston Brewery. Last stop at City Built Brewing Co. we will be switching to beers only.

On this tour you'll be visiting Harmony Hall, Creston Brewery & City Built Brewing Co. There will be a variety of food items from each stop including portions of appetizers, main dishes and desserts.  If you require vegetarian options let us know in advance, your order can be specially made.  You’ll be treated like a V.I.P. on this tour as you meet some brewers, chefs & taproom managers who will talk about the food & beers!

Creston Brewery is a chill local brewery in the heart of the Creston neighborhood. They produce lagers and ales, and sometimes make unique beers such as smoked and tea infused beers. They use a lot of locally sourced ingredients such as hops, honey, coffee and fruit.  Their food menu is unique as the beers.  At this stop you’ll be trying the Sesame Tuna, Mini Chimi’s, Confit Fried Chicken & a beer float for dessert.

Harmony Hall is a funky & eccentric brewery that is inspired by the great German Beer Halls. This locally owned brewery has hand crafted soups, salads and award winning pizzas!... Just like the beer, food is made in house. They have various lagers, IPA's, porters/stouts and sours to list a few. At this stop you'll be trying brisket nachos, harissa cauliflower, fried brussel sprouts & firetoasted marshmallow brownie.

Tour includes 11 large samples of beer & 8 food items paired with the beers, a private brewery tour and transportation to and from the breweries with a knowledgeable beer tour guide.  Don’t worry about tipping the breweries, we’ll take care of that!

Show up hungry for this tour!