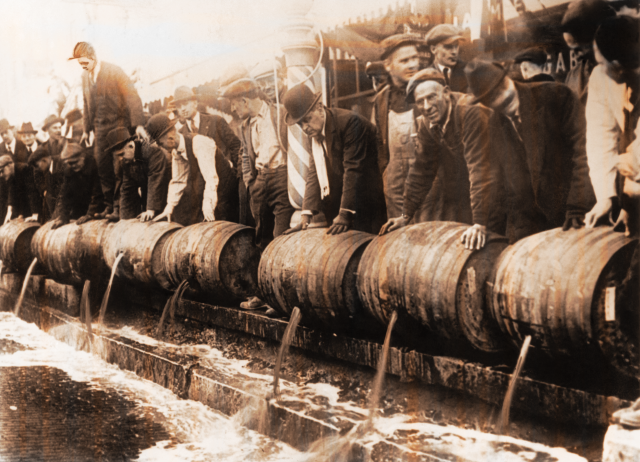 Join us for a special beer tour that will take you back in time on the 100th anniversary of Prohibition. On January 17, 1920 all forms of alcohol became illegal in the U.S. In order to have legal alcohol it had to be prescribed by doctors for medicinal purposes, there were some other loopholes too. We're going to talk about this, and more on Prohibition, during the tour as we visit breweries with historic ties: Harmony Hall, Grand Rapids Brewing Co. & The Mitten Brewing Co. Along the way we will point out some buildings that were once thriving breweries back in the pre-Prohibition days.

We will not be celebrating Prohibition, yet rather learn about the swift rise and inevitable fall of it...and drinking delicious beers along the way. So join us as we cheers to the past and give thanks to legal beer!

The name Grand Rapids Brewing Co. has been around since 1892, their flagship beer was a lager called Silver Foam; you can try the modern version of that beer today! This location of GRBT opened on December 5, 2012 (79 years to the date Prohibition was repealed). Did we mention they have the best game room in Grand Rapids?!

The Mitten Brewing Co. is located inside an engine house built in 1890. One of Grand Rapids most well-known breweries, The Mitten serves up some excellent crafty beers. Country Strong IPA and Triple Crown Brown are well known among the locals and beyond.

Harmony Hall is a funky & eccentric brewery that is inspired by the great German Beer Halls. This locally owned brewery has hand crafted soups, salads and award-winning pizzas!... Just like the beer, food is made in house. They have various lagers, IPA's, porters/stouts and sours to list a few.

Tour includes 12 samples of beer, a private brewery tour and transportation to and from the breweries with a knowledgeable beer tour guide.

*There will be an opportunity for dinner at the 2nd stop (either Grand Rapids Brewing Co. or Harmony Hall).